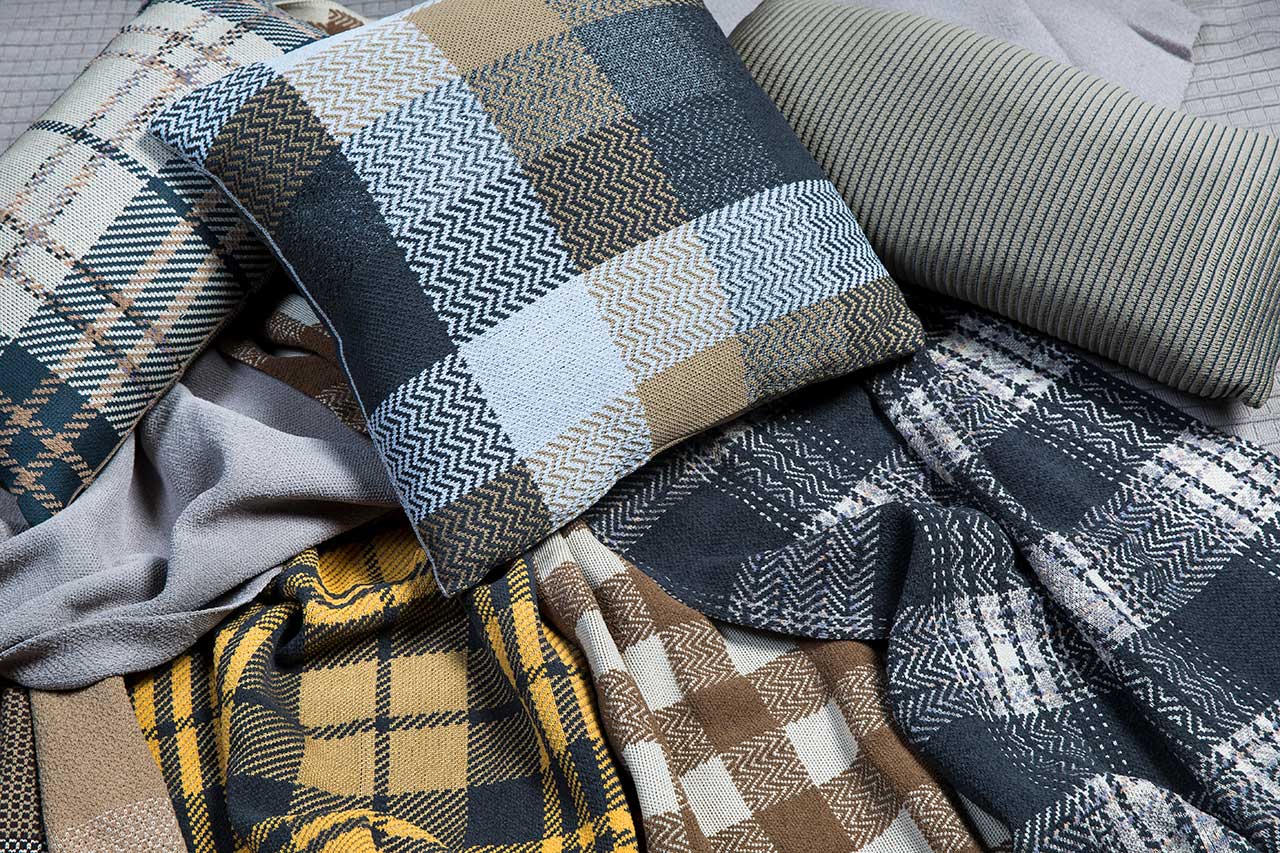 To understand how plaid has been a part of my life since childhood, one could look no further than our circa-1963 family  , in which my entire family is plaid-clad: pleated skirts for my sister and me; a suit for my mother; and a shirt for my dad, all matching and all handmade by my fashion-conscious mother out of Stuart tartan.

(I confess, I continued this tradition for the next generation and forced plaid holiday-wear on my own kids. Now adults, they’ve made a full recovery and can even occasionally be seen wearing a plaid shirt — voluntarily.)

In graduate school, I was taught to design plaids in paint, by an instructor who designed for Arrow shirts for years. But plaid found its way into my life well before then, too, particularly through years of wearing Catholic school uniforms. To this day, I still have a hard time walking away from a beautiful plaid garment or scarf. Perhaps my fascination with the fabric can be explained in part by the “wee bit” of Scottish heritage I discovered I have, thanks to Ancestry.com. (This might also explain why the sound of bagpipes can bring a tear to my eye.)

What we casually call plaid, Smithsonian reminds us, is properly known as “tartan,” with its circa-1500s origins rooted in the families of the Scottish Highlands, many of whom adopted a specific tartan that came to symbolize their clan. (Though, the earliest example of tartan dates back much further: the Cherchen Man, a mummy of Caucasian descent from approximately 1000 BC, was discovered in the western Chinese desert in 1978 dressed in tartan pants.)

The colors and organization of the weave created the signature tartans for the Scottish clans: the MacLeod tartan, for instance, is predominantly yellow with a bit of red and black, while the Armstrong tartan is Kelly green and bright blue, with a small amount of black. (If you do have Scottish heritage, you can search here for the tartan associated with your surname.) While tartans today have clear colors and distinctive weaves, the original colors were based on the natural dye stuffs available in the areas where a clan lived.

These days, we might commonly associate plaid with cozy flannel shirts or Christmas pajamas, but at one time, it was a battle uniform. In 1714, the infamous members of the Royal Highland Regiment, also known at the Black Watch, led the Highland clans in an attempt to claim the British crown for James Stuart.  This unsuccessful campaign finally ended in 1746 with the Battle of Culloden, and the subsequent banning of the tartan by England.    “The kilt is the material mark of Scotland”, writes Clare Hunter in Threads of Life.  The kilt, and other traditional dress, have frequently been suppressed by external forces to sever a community from its past.  “To rob a community of what nourishes it’s sacred and secular meaning is to render it mute, and make assimilation more easily managed.”

But the Brits couldn’t keep tartan locked away forever. The romance of Scotland — and, by extension, of tartans — met a wider audience in 1814, when Sir Walter Scott published the first “Waverley” novel. The series kickstarted a romantic fascination by the English of their neighboring country, which shared the British parliament and monarchy.  Scott’s novels also popularized the romantic tradition of clan tartans, analogous to Great Britain’s family coats of arms. Tartan registries grew from this, led by the textile mills rather than by the originators of the Scottish tartans. Meanwhile, “fashion tartan”— in other words, tartans not associated with a clan — entered the apparel and accessories market. What was once a battle uniform was now becoming a fashion statement.

As Scots immigrated to Canada and the U.S., they brought the tartan tradition with them. A trader in the mid 19th century traded his clan tartan for buffalo, and thus, Buffalo plaid — which one can now find everywhere from L.L. Bean to Urban Outfitters — was born. In 1969, a tartan even traveled to space with Alan Bean, an American astronaut with Scottish heritage. The provinces of Canada each have a tartan, and 17 states have “official” plaids. (And yes, I looked at all of them, and have to say that Texas’s Bluebonnet Plaid is really fabulous.) The Sultanate of Oman, the Metropolitan Police of Atlanta, and Princess Diana all have tartans.

The term “plaid” more correctly refers to the British and American textile manufacturers who brought the less traditional versions to the marketplace. More contemporary examples include the Pendleton shirts worn by the Beach Boys in the 1960’s, oddly associating plaid with “Surf Rock.” LA street gangs have used plaid to identify their allegiance. Plaid has been adapted by ‘70s punk culture, the ‘90s Seattle grunge scene, and the more recent vinyl record loving “hipster” crowd. It was even part of the 2010 US Snowboarding team’s uniforms at the Olympics. It begs the question: is there anything plaid can’t do?

Be it ancestry, association with some group or cause, or just a nostalgic connection to a particular time and place (including, for me, one especially iconic family Christmas photo), I think we all have some connection to plaid. Even if that connection is just an appreciation for one handsome piece of cloth!

A Brief History of Plaid

The History of Plaid